Smart enough to be a teacher, but not that smart... 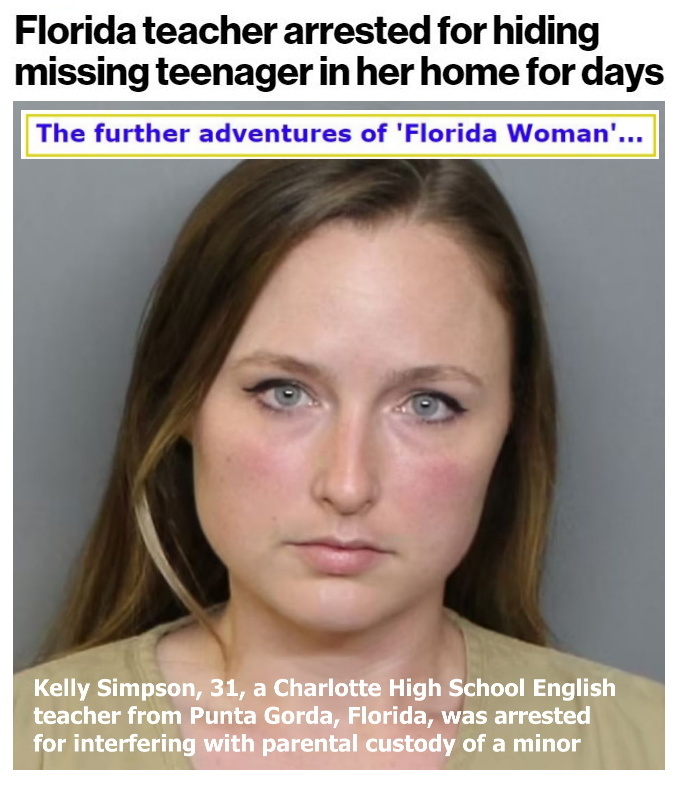 A female Florida high school teacher hid a 15-year-old student with
a crush on her inside her home after she knew that his parents and authorities were looking for him, authorities say.
Kelly Simpson, 31, who teaches English at Charlotte High School where the teen attends, was arrested on Tuesday and charged with interfering with the custody of a minor, police say, after a brief standoff with police at her front door.
Last Friday after skipping school, the boy who was only identified by the initials D.J., got in an argument with his parents and stole $100 from their home on Manatee Lane in Port Charlotte.

The teen took off without his cellphone or medication last Thursday, prompting his worried parents to file a report with the Charlotte County Sheriff's Office.
Detectives scoured the boy's social media and tried to trace him through bank records and electronic devices, but days went by without any indication of the teen's whereabouts. He left no note behind either.
Detectives received a tip that he had been staying at an undisclosed home in Punta Gorda, Florida, but when they went to the home, the person there said that D.J. had been picked up by a woman named Kelly who was driving a black car.
The boy's parents told police that the only Kelly they knew was his former English teacher. They told police that their son 'would talk about Kelly constantly and would even bring her coffee,' according to court papers.
When Detective Jonathan Murray went to Simpson's home, she told them that she knew the boy and that she had seen the missing persons poster that they had put up around town, but when cops asked to search for the teen inside, she told them that he wasn't there. 'She replied that she did pick him up from Punta Gorda and then dropped him off at a gas station,' according to Murray's account.
Detectives pressed her to look inside the home and again she hesitated. 'I asked again if I could clear the home and she stated no,' the detective said. 'Because D.J. was not there.'
It was only after the detective told her that if they found out later that the boy was there that she could be charged with a crime that she admitted that he was inside the home. 'Kelly stopped talking then stated that she would go inside and have him come out,' Murray said. 'Kelly proceeded inside the home and after approximately 10 minutes, [he comes out the home.
The boy told police that he had been picked up by the teacher and spent one night there, according to police. 'Kelly Simpson was placed under arrest for interfering with the custody of a minor after picking the juvenile up from an unknown location and concealing him inside her home while having knowledge of his missing endangered status,' the sheriff's office said in a statement. She was released on $5,000 bail and requested to be appointed a public defender.
...
Need to find a nice gift for a special someone
who might be a cat lover? 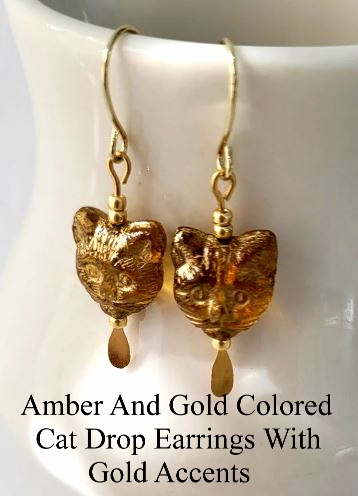 Click on the picture above for information on this item.
You can find something nice for your Mom, your wife,
your daughter or your girlfriend right here:
https://www.etsy.com/shop/BjacksonJewelry
...
- August 18, 2022