You have a better chance of hitting the Powerball jackpot than this, but it still killed him... 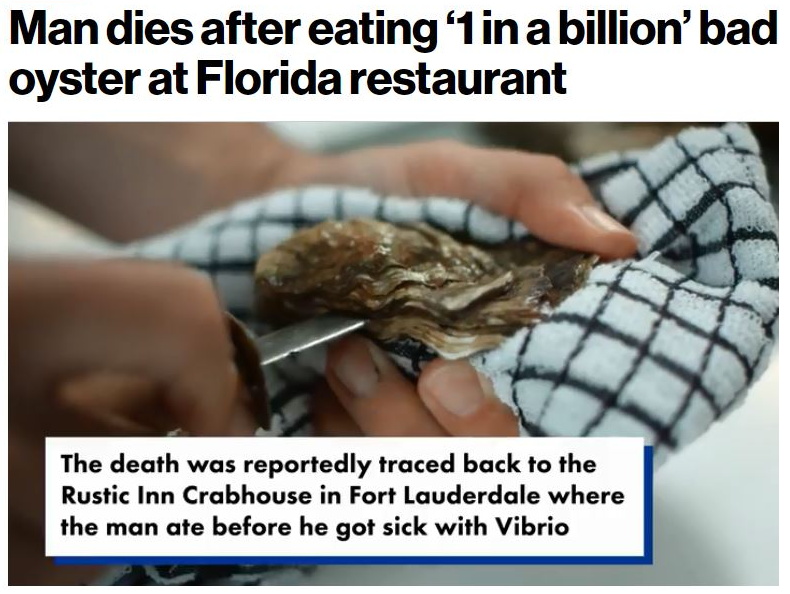 A Florida man died after he caught a bacterial infection from a “one in a billion” bad oyster. The death was traced back to the Rustic Inn Crabhouse in Fort Lauderdale, where the man ate before he got sick with Vibrio. The manager of the restaurant told the outlet as many as 100 dozen oysters were served the day the man ate there.
“He had that one in a billion that was bad,” Gary Oreal reportedly said. “I feel horrible.” “Oysters are top of the mountain for dangerous foods to eat. I have eaten them my entire life, and will continue. But you are putting yourself at risk when you do it,” Oreal added.
He told the local newspaper the Florida Department of Health inspected the restaurant’s kitchen and it passed “with flying colors” after the man got sick. “Over the course of 60 years, we have served a couple billion oysters and we never had anyone get sick like this guy did,” Oreal said.

The unidentified man, who reportedly worked at the restaurant decades ago, was the second person in the state to die from raw oysters this month. The Pensacola News Journal reported a community leader died on August 9 from Vibrio.
...