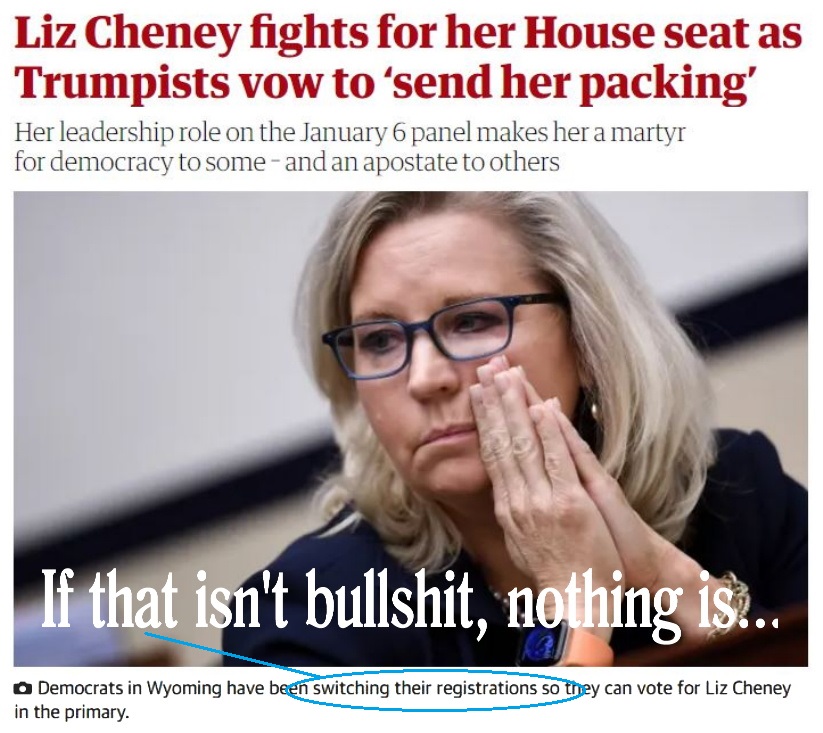 The three-term congresswoman - a sheep in wolf's clothing if ever there was one - may lose her seat in Tuesday’s Republican primary election in Wyoming, the most watched congressional primary of the year. Opinion polls show Cheney trailing Harriet Hageman, conservative lawyer and Trump’s choice, and defeat for the 'clarion voice' of the January 6 panel will, in many eyes, make her a martyr for Democrats. Good for her. Fuck her and fuck them, too..
It will also signal a tectonic shift in Wyoming, the least populated state in America and one of the most devoutly Republican. Its most consequential political figure is Dick Cheney, vice-president under George W Bush and father of Liz. Last week, in cowboy hat, fleece and gruff tones, he recorded a campaign video for her, excoriating Trump as a “coward” and saying there has never been anyone who is a “greater threat to our republic”.

Victory for Hageman would therefore be widely interpreted as a repudiation of Wyoming’s most venerable political dynasty, evidence that the state Republican party no longer belongs to the Cheneys but to Trump. That would reflect a final national pivot away from the Bush era establishment to the “Make America Great Again” movement – from old school conservatism to far-right populism - and a move in the right (no pun intended) direction after two years of stupidity and failure.
...