I'm screwed. The best year of my life was 50 years ago.

It's hard for most of us to say what time period was the best time of our lives. It isn't for me - it's was the year when I went from 16 to 17...
The year was 1969. So much shit happened that year that not only changed my life - it changed the direction the world turned in.

Half a million people in one place for three days and it was mellow and exciting and scary and safe - and it was fun. That probably won't ever happen again in any way, shape, manner or form as Sean Hannity would say. Don't even get me started on the music of that time - we'll stay there forever.
... 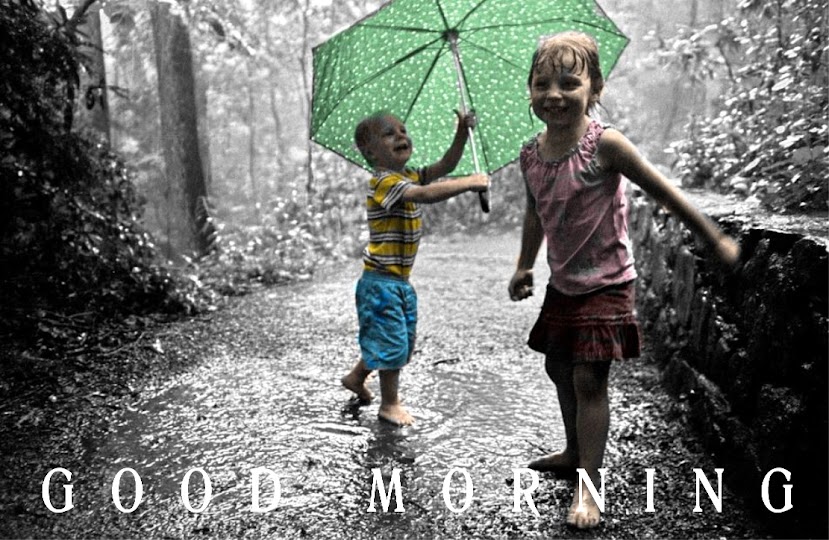 ...
I've always liked Steven Stills going all the way back to the Buffalo Springfield and Super Sessions with Mike Bloomfield. I have never liked David Crosby and honest-to-god cannot figure out how that jerkoff is still alive - it's beyond comprehension. I'm neutral on Nash, and Young can just plain go fuck himself. Juss' sayin'...
... 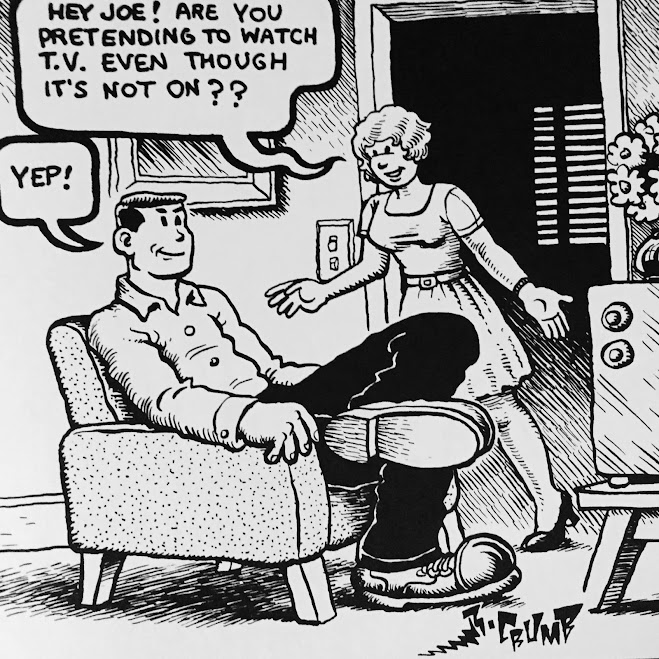 ...
Don't you ever ask yourself 'Who comes up with this
crazy bullshit'? Certainly nobody I've ever known. 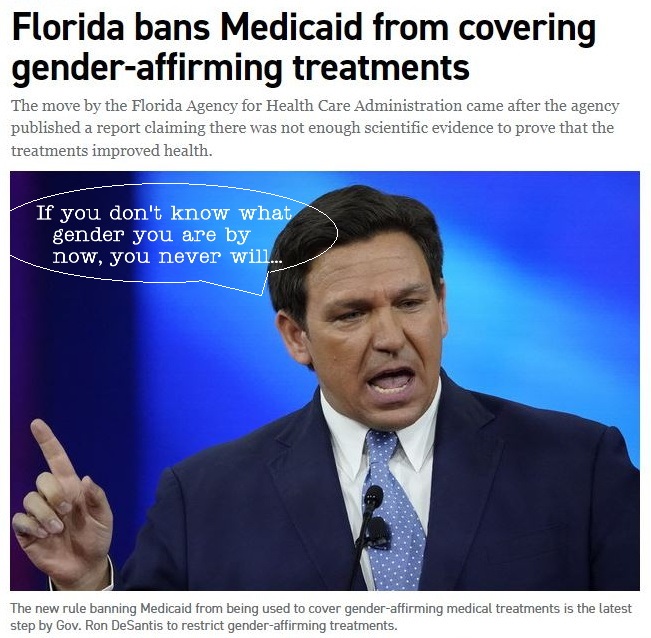 Gender-affirming care, as defined by the World Health Organization, encompasses a range of social, psychological, behavioral, and medical interventions “designed to support and affirm an individual’s gender identity” when it conflicts with the gender they were assigned at birth. The interventions help transgender people align various aspects of their lives - emotional, interpersonal, and biological - with their gender identity. As noted by the American Psychiatric Association (APA), that identity can run anywhere along a continuum that includes man, woman, a combination of those, neither of those, and fluid.
The interventions fall along a continuum as well, from counseling to changes in social expression to medications (such as hormone therapy). For children in particular, the timing of the interventions is based on several factors, including cognitive and physical development as well as parental consent. Surgery, including to reduce a person’s Adam’s Apple, or to align their chest or genitalia with their gender identity, is rarely provided to people under 18.
“The goal is not treatment, but to listen to the child and build understanding — to create an environment of safety in which emotions, questions, and concerns can be explored,” says Rafferty, lead author of a policy statement from the American Academy of Pediatrics (AAP) on gender-affirming care.
Good god - how did we ever get to this place?
... 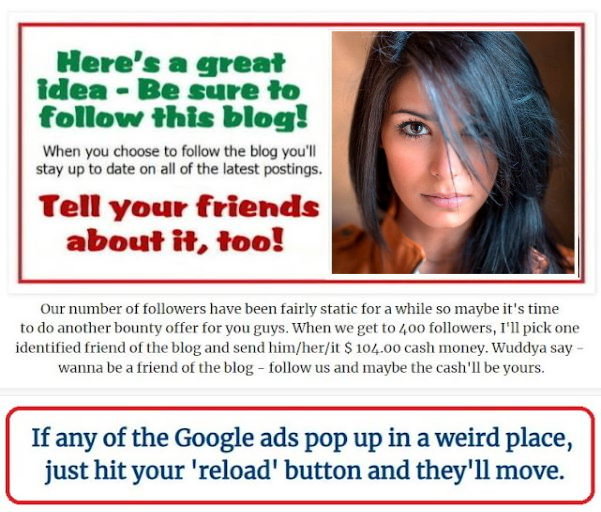 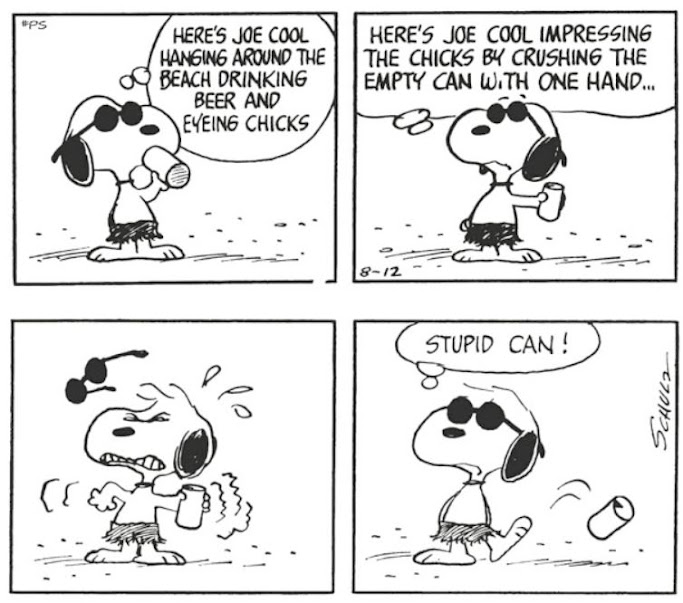 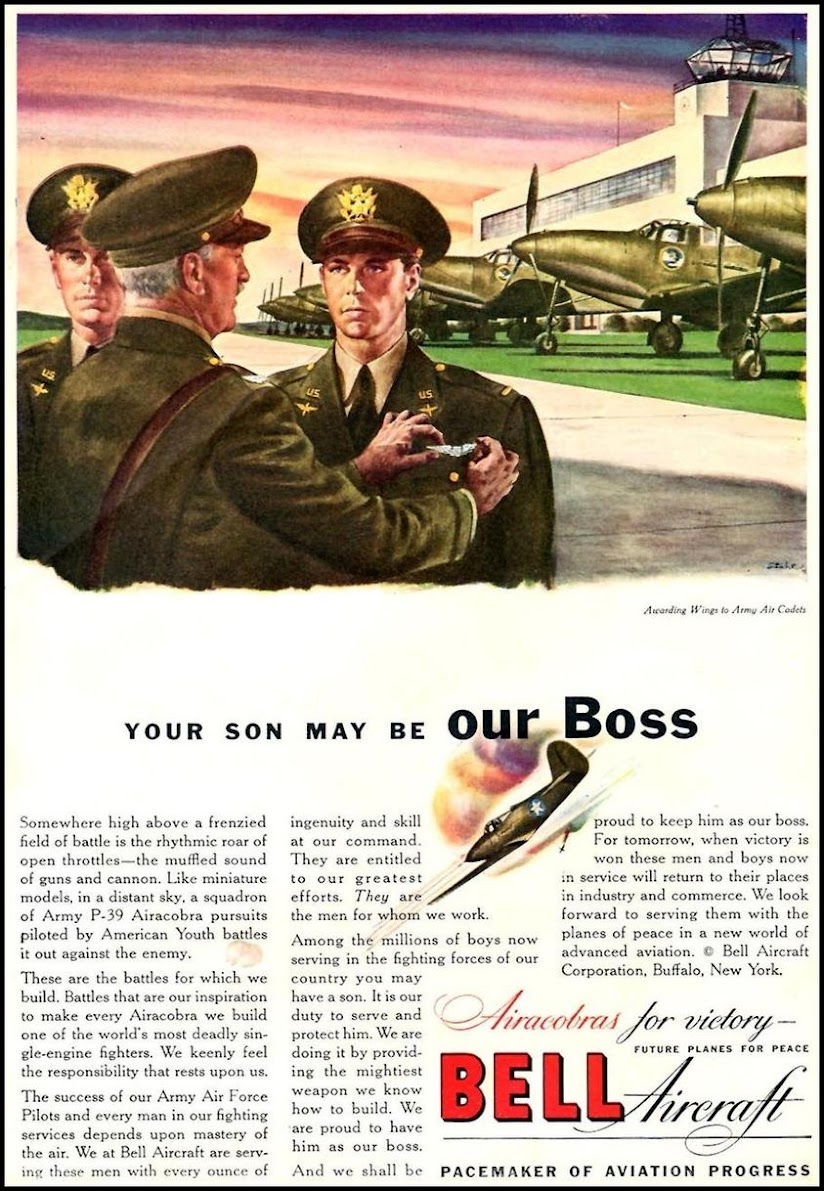 ...
Just a couple of quick words about polls
like this one: 'FUCK THEM POLLS'... 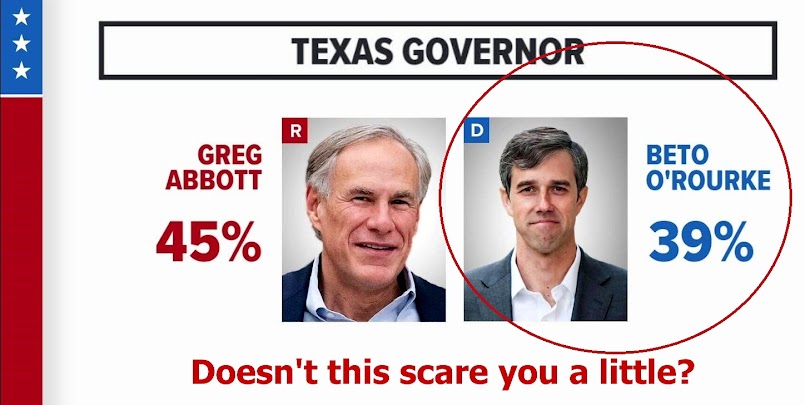 Texas Gov. Greg Abbott has maintained a 7-point lead over Democratic nominee Beto O’Rourke in the Lone Star State’s governor’s race, new polling shows.
The Dallas Morning News-University of Texas at Tyler poll showed Abbott’s 46 percent to 39 percent lead over O’Rourke remained steady since May.  Abbott pulled the bulk of his support from the state’s Republican constituents in the new survey, with more than three-quarters saying they “approve” or “strongly approve” of his handling of the governorship - compared to just 22 percent of Democrats.
Eighty-five percent of Republicans say they’d vote for Abbott in the race for governor, while 81 percent of Democrats say they’d vote for O’Rourke.
A slightly higher percentage of Democrats reported they’d cross party lines to back Abbott than Republicans who said they’d do the same for O’Rourke - 12 percent and 8 percent, respectively.
Higher percentages of respondents said Abbott would do a better job than O’Rourke at handling crime reduction, border security, electrical grid management and the economy, though more respondents said O’Rourke would be better at “bringing people together” than Abbott.
In all, 47 percent of respondents said they approved of Abbott’s job performance and 49 percent disapproved. More than half of voters surveyed also said they thought Texas was “headed off on the wrong track” under its current leadership, at 56 percent, while 43 percent said it’s “headed in the right direction.”
At the same time, slightly more than half of respondents - 53 percent - said they approved of Abbott’s management of the state’s economy
... 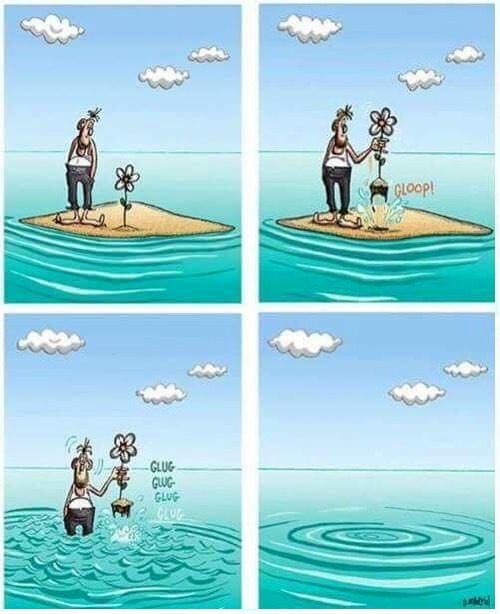 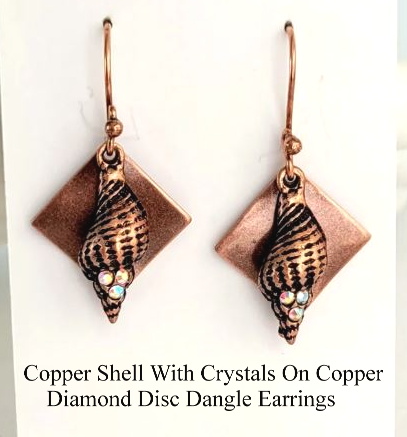 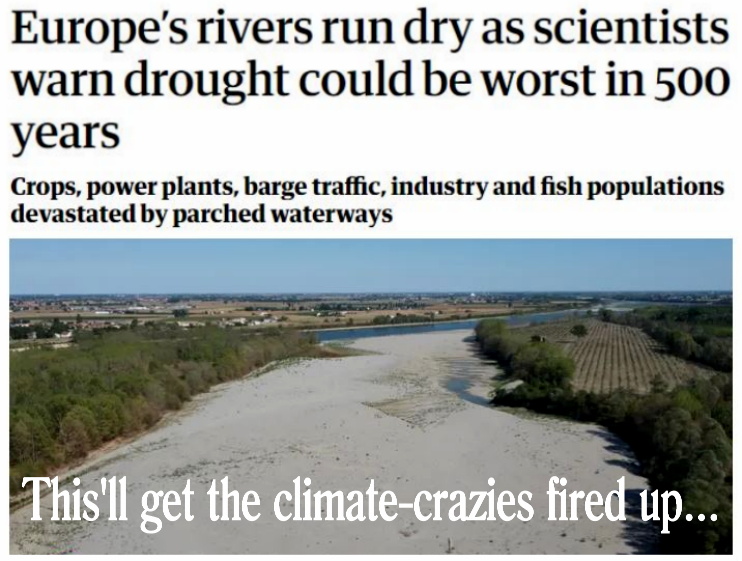 In places, the Loire can now be crossed on foot; France’s longest river has never flowed so slowly. The Rhine is fast becoming impassable to barge traffic. In Italy, the Po is 2 metres lower than normal, crippling crops. Serbia is dredging the Danube.
Across Europe, drought is reducing once-mighty rivers to trickles, with potentially dramatic consequences for industry, freight, energy and food production – just as supply shortages and price rises due to Russia’s invasion of Ukraine bite.
Driven by climate breakdown, an unusually dry winter and spring followed by record-breaking summer temperatures and repeated heatwaves have left Europe’s essential waterways under-replenished and, increasingly, overheated.
With no significant rainfall recorded for almost two months across western, central and southern Europe and none forecast in the near future, meteorologists say the drought could become the continent’s worst in more than 500 years.
... 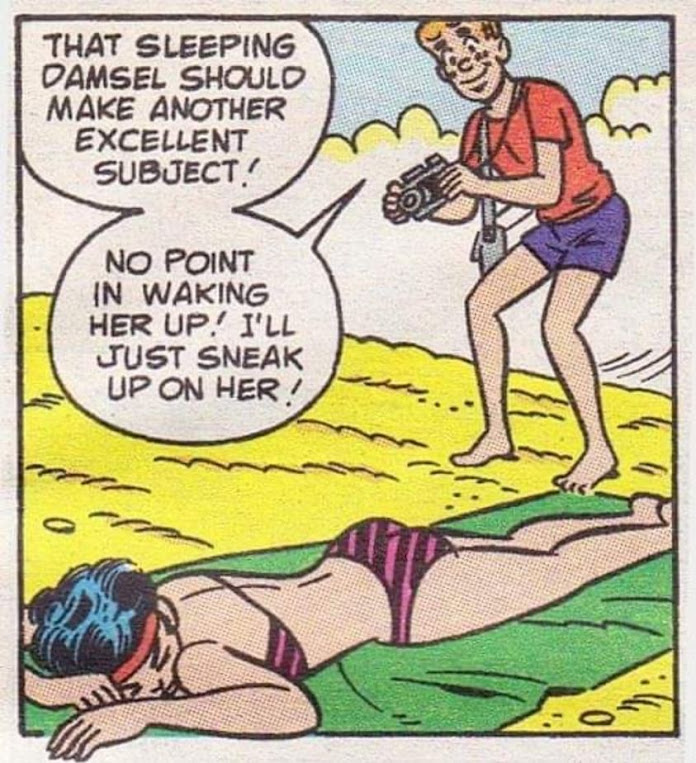 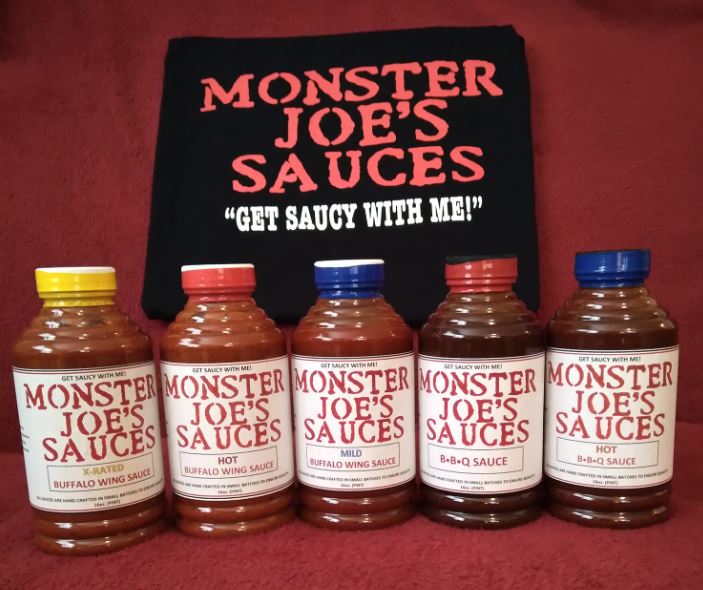 Joe Trojak is a buddy of mine, and has been for a very long time. I always thought of Tubby as a bit of a lost soul, but he is also one of the nicest, funniest, silliest motherfuckers I have ever know. Anyway, he's been making and selling his own brand of sauces for about 10 years or so, and I gotta tell ya, they are really friggin' good. Seriously - I'm not blowing smoke up his ass - I'm just trying to hip you to a cool product. It's small-batch stuff,  but he does well with it, and has a website for ordering. He doesn't have a staff or anything - he does everything himself.
Take a look and try a bottle or two. You'll thank me for this:
https://monsterjoessauces.com/
... 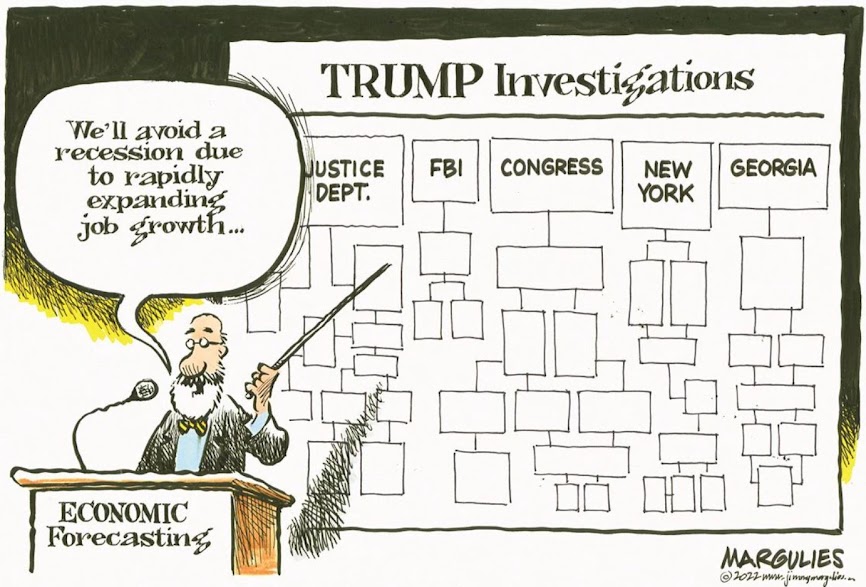 ...
These illegals must think we're the stupidest motherfuckers on the planet. I don't blame 'em for thinking that... 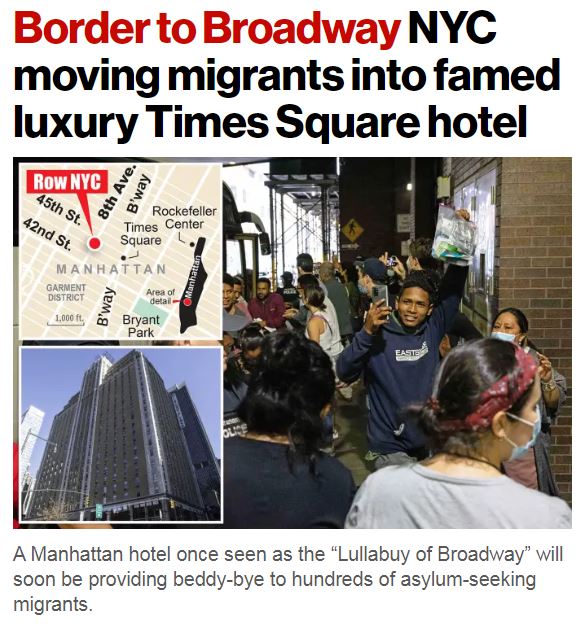 A luxury Manhattan hotel once touted as the “Lullabuy of Broadway” will soon be providing beddy-bye to hundreds of asylum-seeking migrants.
Mayor Eric Adams plans to convert the Row NYC — formerly known as the Milford Plaza and located in pricey tourist-packed Times Square — into an intake center and shelter for as many as 600 migrant families amid the city’s spiraling homelessness crisis, three sources familiar with the matter said.
“In a month or two, we’re about to open up for [the city Department of Homeless Services], for homeless,” a hotel staffer said on Monday.
“They’re working on an agreement, a contract,” the worker said of the plan, which is designed to help handle homeless border-crossers bused to the city from Texas.
“It’ll be here at this hotel, but they’ll keep the DHS shelter on a certain floor. But that hasn’t started yet, they said a month or two.”
City Hall hasn’t said what the hotel plan may cost or provided any other details about it, including who exactly will run the operation.
Godforfuckin'bid they just throw these motherfuckers back on a bus and haul their asses back to fuckin' Mexico where they came from. Why the fuck should any American taxpayer pay one friggin' penny towards these law-breaking jerkoffs? This shit slays me. It really does.
... 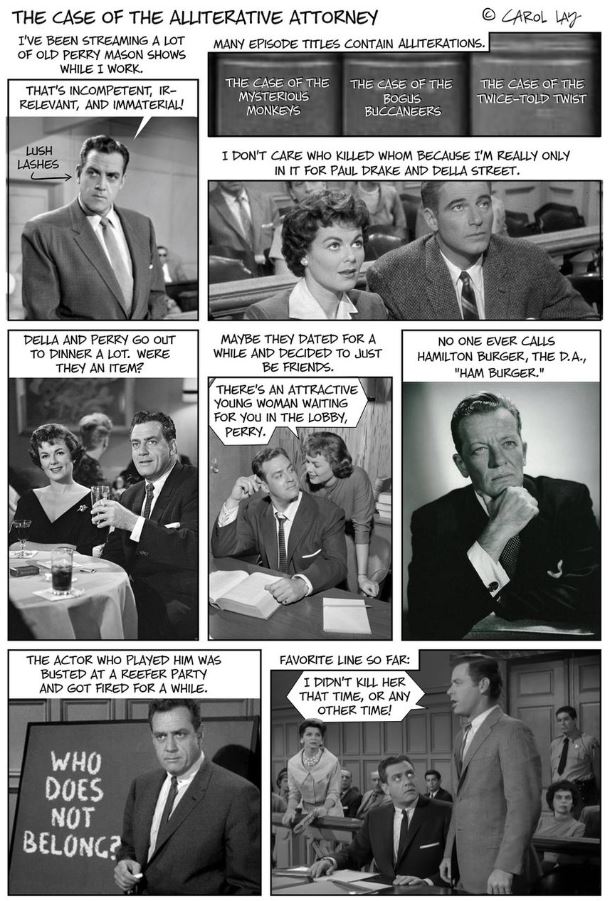 I don't quite get this whole thing but I do think it's pretty 'high-brow' kinda funny. Raymond Burr was gay? WTF is up with that? Juss' sayin'...
... 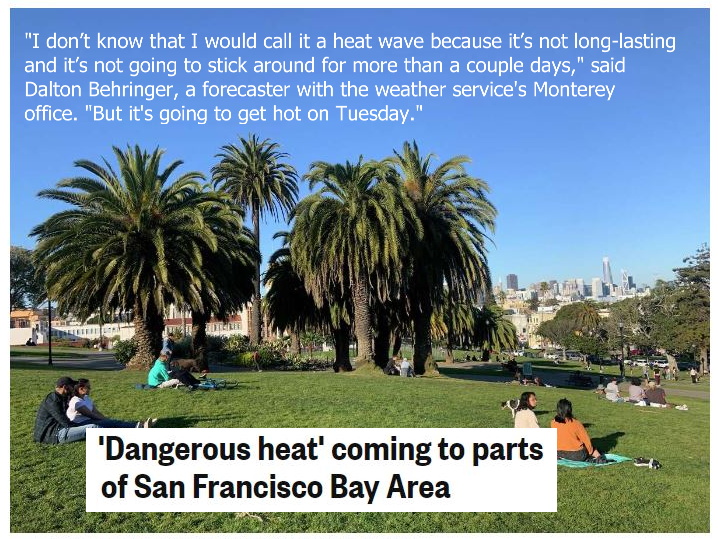 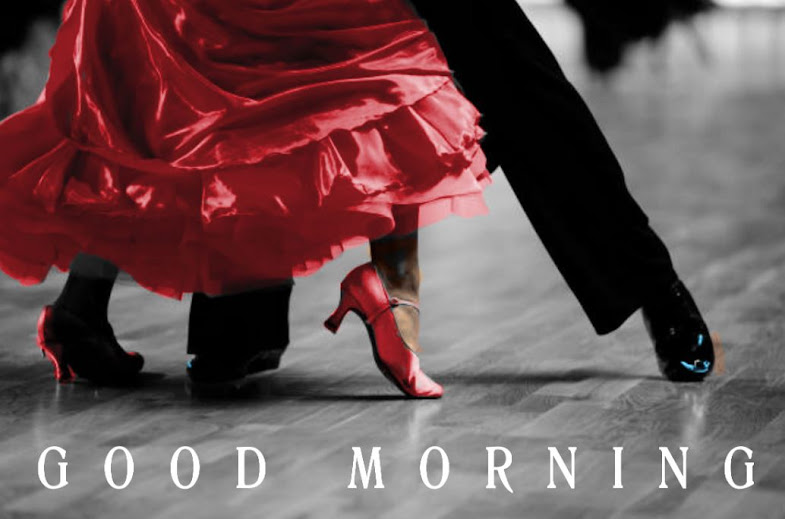