At least he died doing what he was good at. Or maybe he wasn't that good at it after all... 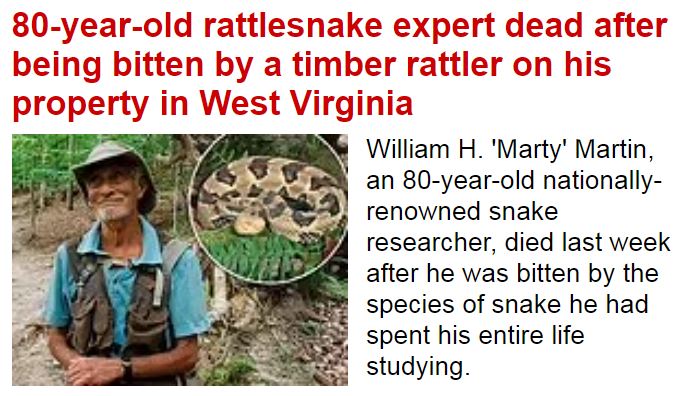 A nationally renowned snake researcher died last week after he was bitten by the species of snake he spent his entire life studying. William H. 'Marty' Martin, 80, was killed when he was bitten by a timber rattler on his property in Harpers Ferry, West Virginia. Martin would frequently hike into the mountains and visit remote locations to document the activity of the snakes and record their numbers.
Along with studying the snakes, Martin was an advocate for their conservation and tried to decrease the stigma around them. In 1993, he told the Baltimore Sun 'there was a time when scientists identified animals as good or bad to man.'
Timber rattlers, or timber rattlesnakes, are considered one of the most dangerous species of snake in the country due to their deadly venom, long fangs and large size. They are one of approximately 30 venomous species in the US, and can be found from Texas to New England.
Villari said the the snakes avoid contact with humans whenever possible, even when they're stepped on accidentally. 'They save their venom for their prey,' said Villari.

Deaths from snakebites are very uncommon in the US, and the Centers for Disease Control estimates approximately five people die from them annually, though around 3,000 are reported each year. John Sealy, a rattlesnake researcher from Stokesdale, North Carolina, said Martin was revered for his ability to find the reptiles and conduct field work.
...

But I guess they were a little smarter than him.
...